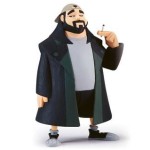 Dear oh dear. The well-loved and well-respected actress Mollie Sugden has died, aged 86. In tribute to Ms. Sugden’s most famous character, Mrs. Slocombe, and to the constant running jokes about her pet pussy cat Tiddles, Jonathan Ross sent out a tweet encouraging one and all to use the Twitter hashtag #MrsSlocombesPussy in their tweets. […]

It’s Sonic Youth Week on iTunes to celebrate the release of their new album, The Eternal. It’s a classic Sonic album, g’wan, give it a go, you’ll love it as much as I do!

I’ve been playing about with OS X on a Dell Mini 9 netbook. A major hassle is that it only has 8GB of on-board disk space (albeit on a lovely silent SSD). I bought a 16GB Class 4 SDHC card to use for my home directory, but it turns out OS X only automatically mounts […]

When I was a kid, one of the stand-out moments of the week was getting to watch an awesome American action-adventure serial on TV. Airwolf, Street Hawk, Manimal, Automan, The A-Team, Quantum Leap, Star Trek, The Fall Guy, Buck Rogers in the 25th Century, Knight Rider, even Blue Thunder. What drove me to keep watching (and re-watching in some cases) was a blend of good characters, fun stories, and usually mind-blowing technology. These shows gave us über-advanced helicopters, talking cars, massive starships, morphing holograms and time travelling scientists.

I want to talk about Battlestar Galactica, to many just another one of those weekly shows with guns, action and silly plots. So, before I start waffling about the end of the 2003-2009 re-imagined version, and if you’ll indulge me, some history.

The BBC, along with BSkyB, have decided not to air an advertisement for DEC‘s Gaza appeal, asking for donations to go towards essential aid from thirteen charities for those affected by the Israeli offensive in Gaza. Not only have they linked to the bloody DEC website in a news story about how they won’t promote […]

Continue reading
R.I.P. Another Part of My Youth

Tony Hart has died, as has Patrick McGoohan and Richardo Montalban. I’m always stunned at how poignant it can be hearing a celebrity you remember most from when you were a kid has died, even though you’ve likely had only a very peripheral attachment to them, perhaps seeing them on TV or in movies. I […]

I woke up this morning to find Barack Obama has been elected to become the next President of the United States. And what has struck me the most was the way the supporters reacted when the name of the opponent was mentioned by each candidate in their speeches. McCain addressed his supporters in his concession […]

Continue reading
Woss All the Fuss About?

Is it just me, or has this furore over Russell Brand and Jonathan Ross prank calling Andrew Sachs’ answerphone on a radio show been blown out of all proportion? Both men involved have apologised to Sachs, and that should be the end of it. Instead, they are now suspended from their BBC broadcasts, and Sachs’ […]